A massive turn-out for a popular race – Stubbington 10k, the first race of 2017 saw us IOWRR’s bringing a coach across full of runners and supporters.

A total of 53 completed the undulating distance yesterday in the rain. The race now in its 32nd year sold out all 2,000 places before Christmas.

The race starts on a main road, Titchfield road, heading away from the village. The course takes a dip down then back-up cutting through Titchfield then starts meandering through closed twisty country lanes to the bird haven on the seafront. The route follows the main road back past a few pubs winding its way to the village. Finishing in the village square – the event is chip timed although weather might have contributed to lots not receiving a chip time, chip times being on average 4 seconds slower and some even up to an hour out – Bridget completing 10k in 1 min 29!

For some IOWRR’s this was their first attempt at 10k and for lots of others huge PB’s were achieved, and a special shout-out to Polly returning after nearly a year off from racing whilst having Daisy – amazing effort from you all in tough conditions!

Well done to Trish for 1st V50 and Pete for 2nd V50, both receiving lovely mementoes and cash. Also to Mike for coming 39th overall!

Race results (those in bold this is their finishing not chip time): 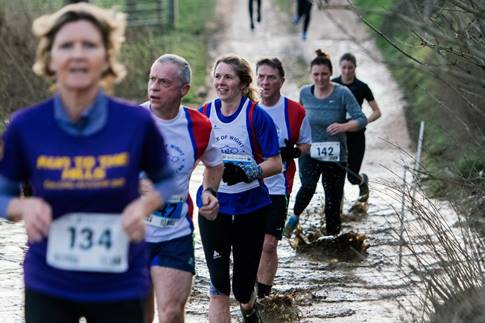 Worthy mention to the following runners:

Two IOWRR’s travelled across to compete in the Bovington Marathon.

White Star Racing hosted for the first time a marathon and half marathon starting and finishing at the world famous Tank Museum Bovington, Dorset.

The course is cross country, muddy, hilly and wet.

2016 is the 100 year anniversary of the Tank, so for this race the medal designs will change every year. 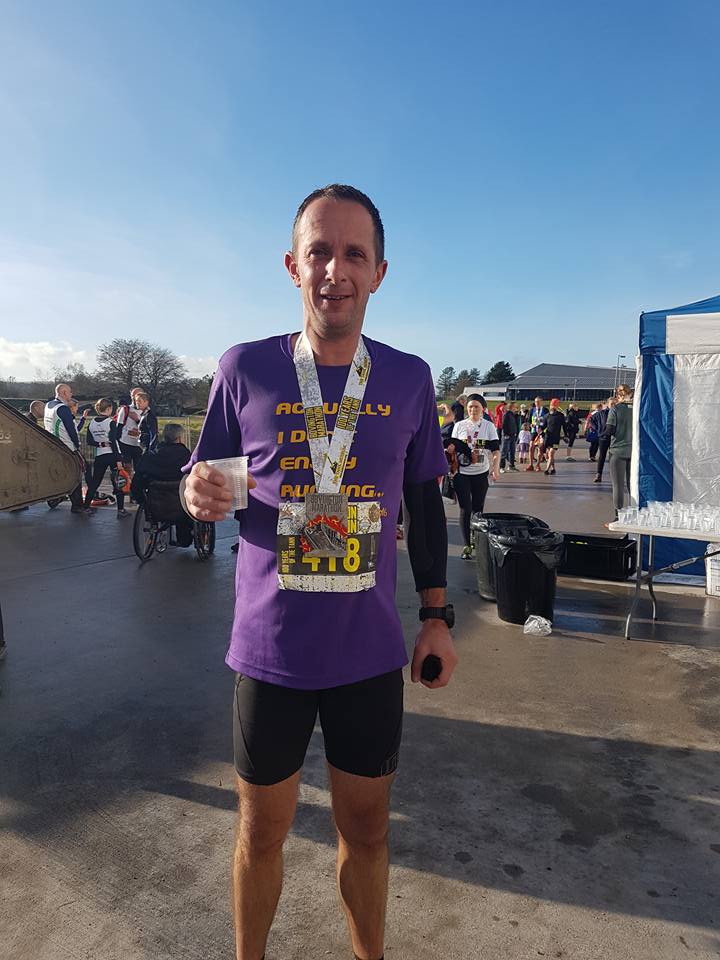 Well done both of you and Dan amazing smashing your PB by 17.29 minutes!! 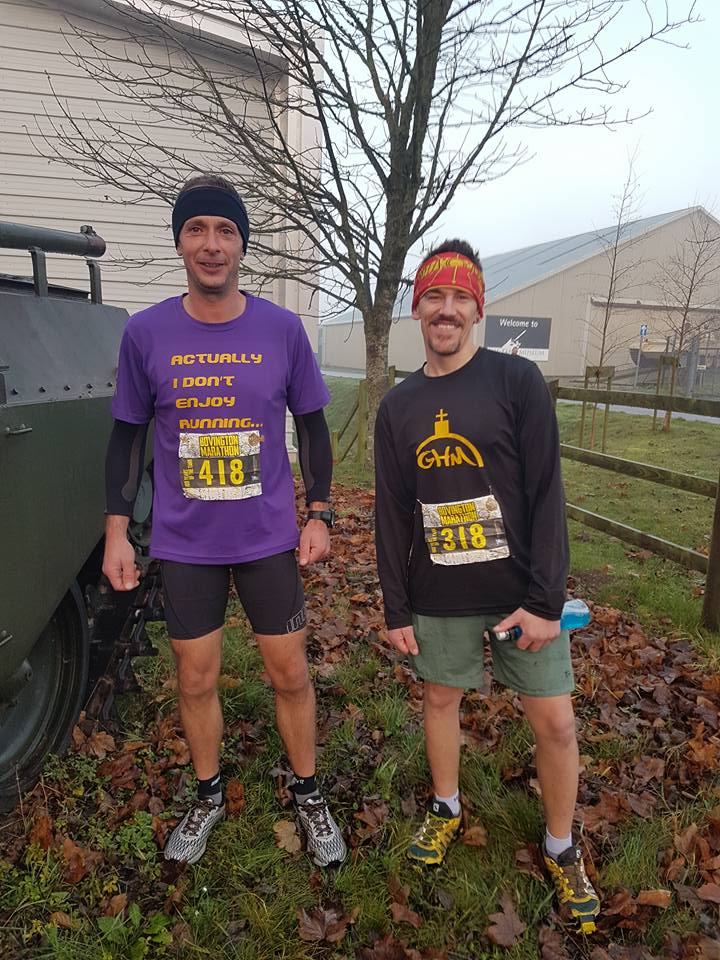 We had an impressive 36 IOWRR’s competing in the West Wight Sport Centres Chilly Hilly; a 10 mile cross country run taking in some of the most spectacular views and hills the West Wight has to offer.

Each competitor was awarded a bauble, mince pie and mulled wine for completing the course. 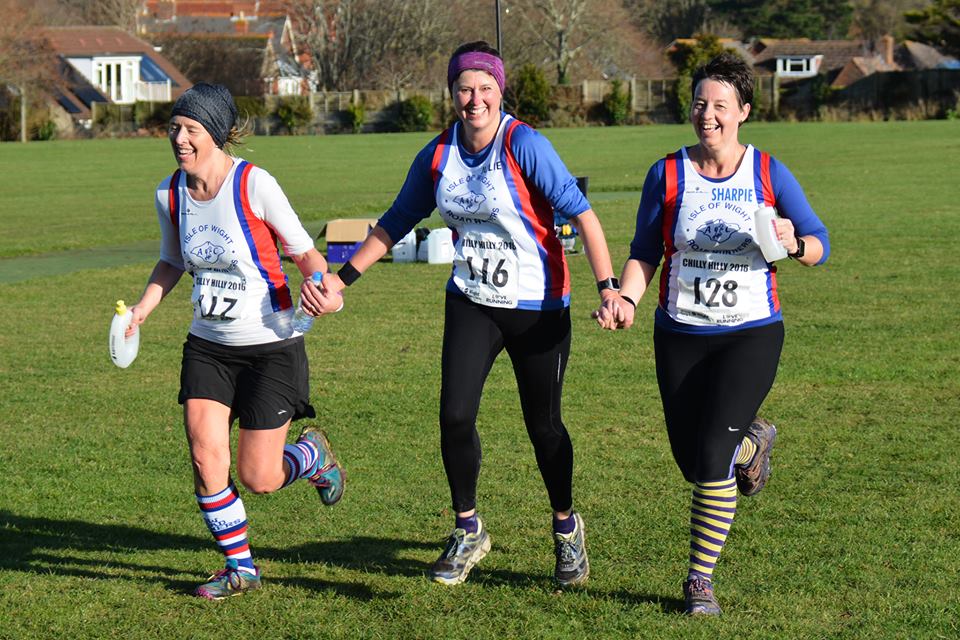 Some brilliant times on a very tough highly course:

Another brilliant evening at the Riverside. We started festivities with a curry buffet and a table magician then onto the awards.

Pat Harris our Chairman gave a great speech recapping all the amazing achievements we as a club and individuals have made over the past year, he’s held post.

The epic fail was awarded to Ian Dyer for his unfortunate attempt at Glencoe Marathon; travelling 550 miles, camping and only running a few miles before his shoe fell apart and he had to pull out.

The committee also award a club member each year and this years trophy and award went to Sarah Sharp the deputy chairman and travel coordinator for her remarkable contribution to the club – well deserved!

We re-awarded the Summer and Winter series trophies to Trish Train. Trophies also awarded for IOW Half Marathon first man Simon Randall and woman Trish Train and our club race St Georges 10 Richard Harvey and Clara Plowden-Roberts. The club 10k trophies given back to Paul Cameron and Trish Train. Finally the HRRL league top three placed within the club:

We gifted each of them with vouchers for Love Running.

Next we had some 13 put their names in for our two club London places. We drew names out of a tombola to leave us 6 participants, envelopes were then handed out to include two entries to London Marathon, two for the inaugural Needles Marathon (Sarah Sharp&Jane Andrews) and finally two for the Isle of Wight marathon (Julie Rasmussen&Steve Bennett). The winners of the London ballot were Sally Trotman and Coral Leach – congratulations ladies!

Finally we concluded with the club raffle, third prize of a years free membership was won by Lyn Snow, a piece of clothing was won by Nick Scott-Denness, and finally a pair of Hoka shoes was won by Claire Stevens.

Thank you all for supporting your club this last year and turning out to celebrate some of the achievements people have accomplished in 2016, you all have helped this club from strength to strength making it one of the largest and best running clubs on the Island! 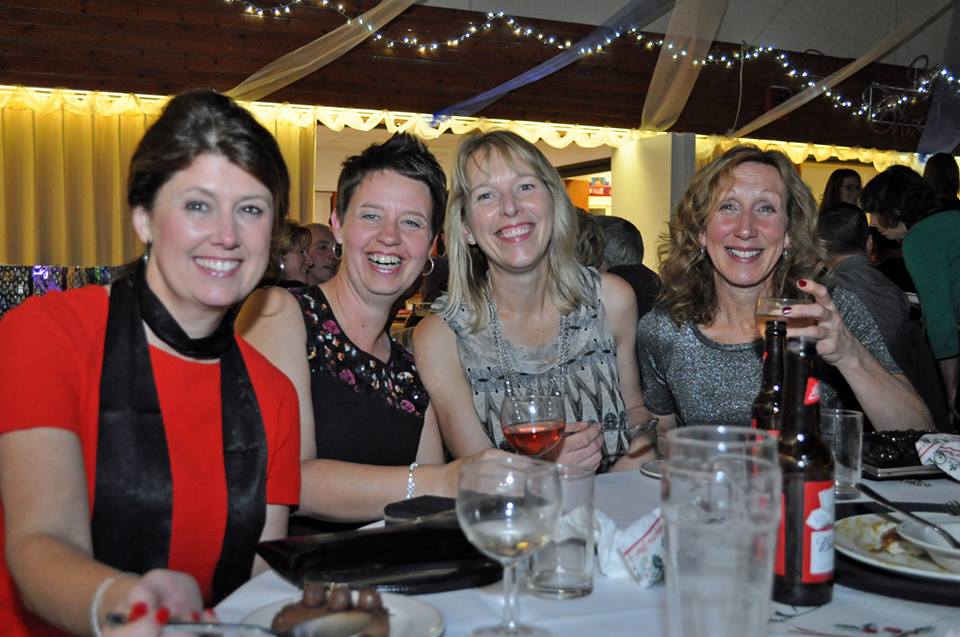 Also thank you to Peter Billington for capturing the evening on camera!

The final HRRL race of 2016 – Victory 5, hosted by City of Portsmouth Athletic Club. The race now in its 70th year attracts a very wide field to include many elites from abroad as well as within the UK.  With an extensive prize list of over £3500 and this year substantial commemorative medals for all competitors.

The course is mostly flat although rather exposed in places and very twisty, but despite this PB’s can be found. Weather conditions for today were highs of 3*c sunny and breezy. 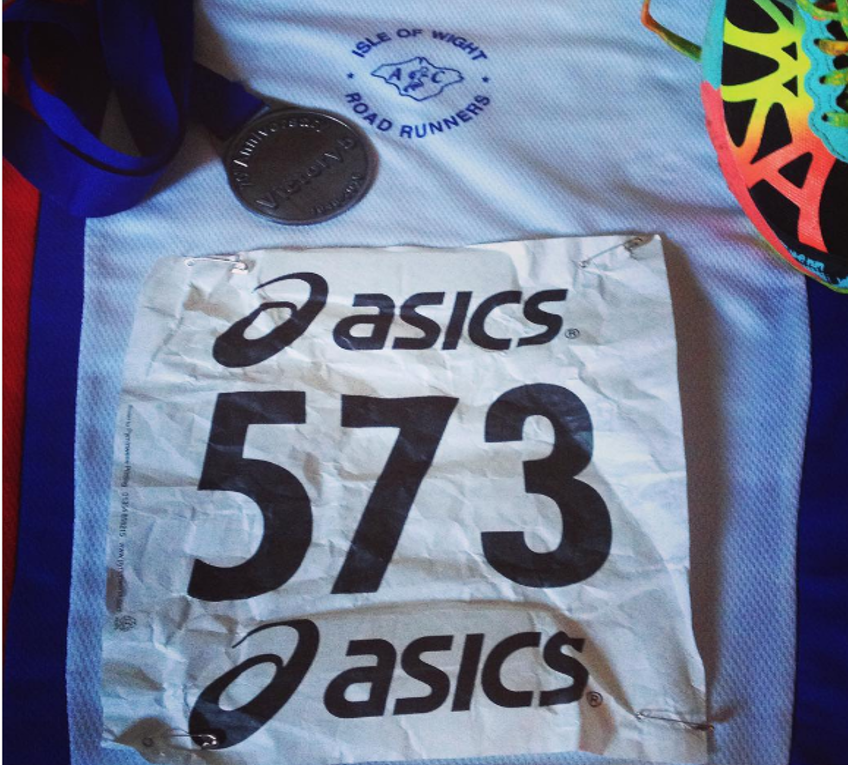 We had a club turn-out of 12 and fielded one mens team and two womens teams – which is fantastic considering it’s the morning after the night before (Club Awards Do)!

Brilliant running from you all, PB’s from Darren, Trish, Abi, Bridget and Tracy, Tracy’s partner Adrian Burrows also travelled with the club and smashed his PB achieving 45:02. Those attempting the 5 mile race for the first time were Mike, Simon, Martin and Sarah Holmes. Finally Trish was rewarded for her awesome time with 1st FV50! Well done all of you, amazing running!

The fourth Hampshire Road Running League race was hosted yesterday by Havant Athletic Club, a debut to the HRRL calender and squeezed inbetween Gosport Half and Victory 5 meaning a slightly smaller club turn-out of 16 runners in a field of 572.

The Hayling 10 is a fast, flat 10 mile road race that winds its way around the roads at the southern tip of Hayling Island. 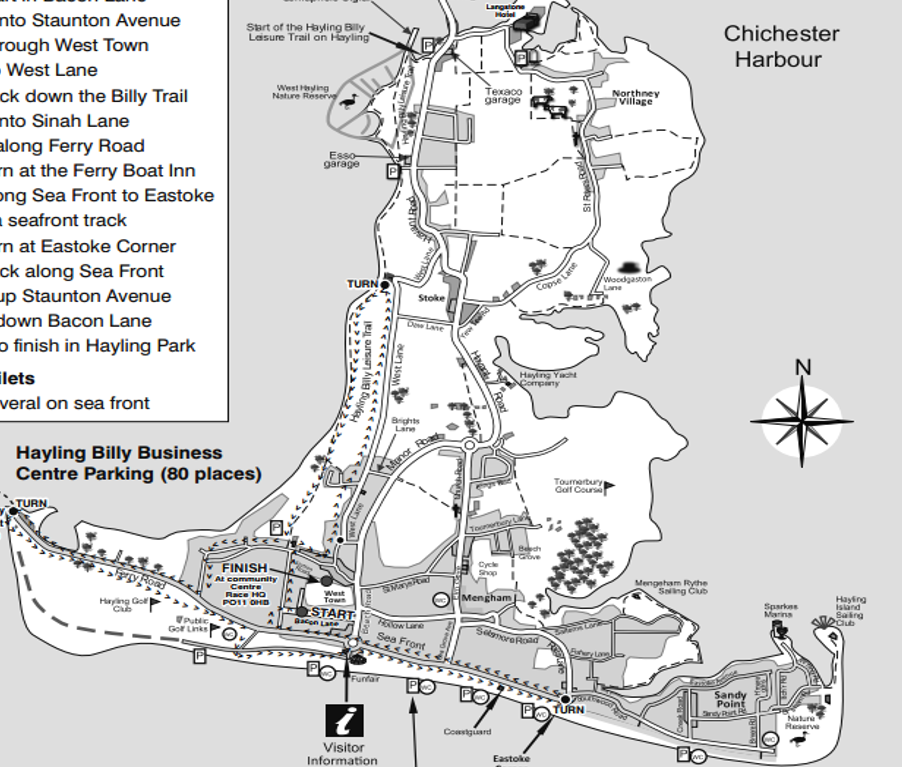 The race start time meant we were unable to use the car ferry and drive round meaning competitors had to catamaran and taxi – but they all made it in time.

Well done all of you and a special well done to those achieving PB’s!

A massive 39 IOWRR’s completed the Gosport Half Marathon, now in its 31st year. As always Gosport provide an awesome goodybag and this years medals were pretty special and a technical tshirt: 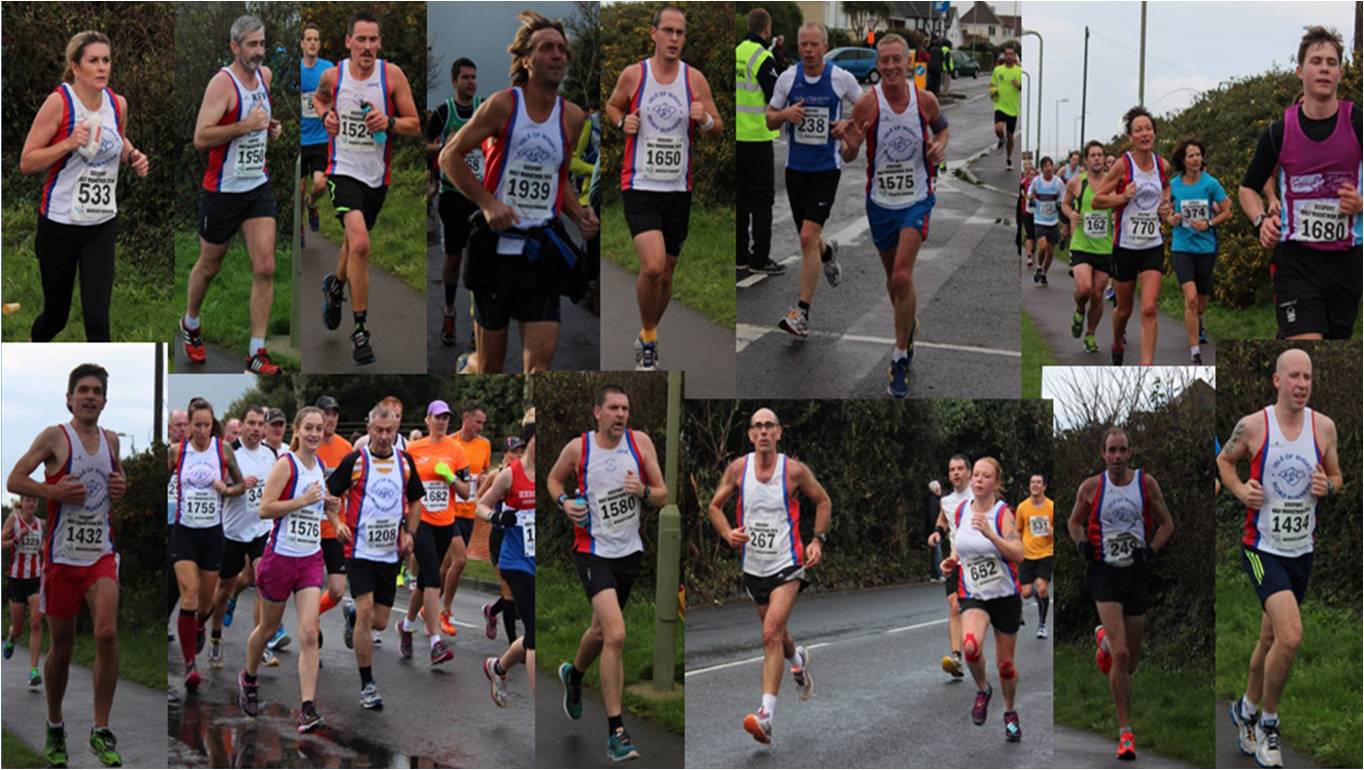 Storm Angus almost put a stop to racing as forecasters predicted winds of up to 98mph and torrential rain/flooding. The storm actually hit the south coast earlier than Sunday day time meaning the race could go ahead.

The course is hosted from Bay School in Alverstoke Bay, the race commences in Browndown Road then a left onto the main road connecting Gosport and Lee-on-Solent, along the top path following the sea then forking left at the end along Salterns road, then looping back along the bottom promenade until the end of the green then completing that section for a second time, finally retracing steps along the road and path to Browndown to finish. The course is mostly flat, a 20m section of pebbly beach but greatly exposed, so the strong gusts must have made the course tough today. Although the current course record was beaten today and we had a whopping 13 PB’s – a third of you, well done!!

With PB’s from the following:

We had a huge turn-out for one of the South Coasts largest races. The Great South Run pulls in large crowds and some very elite talent from around the world.

The fast and flat course is one of the world’s leading 10 mile running events, the course winds its way through the iconic sights of Southsea and Portsmouth, including the Portsmouth Historic Dockyard, home of HMS Victory, past Spinnaker Tower, and finishes on the seafront with beautiful views of the Isle of Wight.

We had lots of IOWRR achieve PB’s on this fast flat course with others making a club debut, well done all of you!

Lucy DeVille travelled up to Manchester to join 10,000 other runners for the Aldi Half Marathon.

The race begins under the arch at White City on the A56 heading up Bridgewater Way before doubling back towards Sale and ends at Lancashire County Cricket Club’s Emirates Old Trafford stadium. 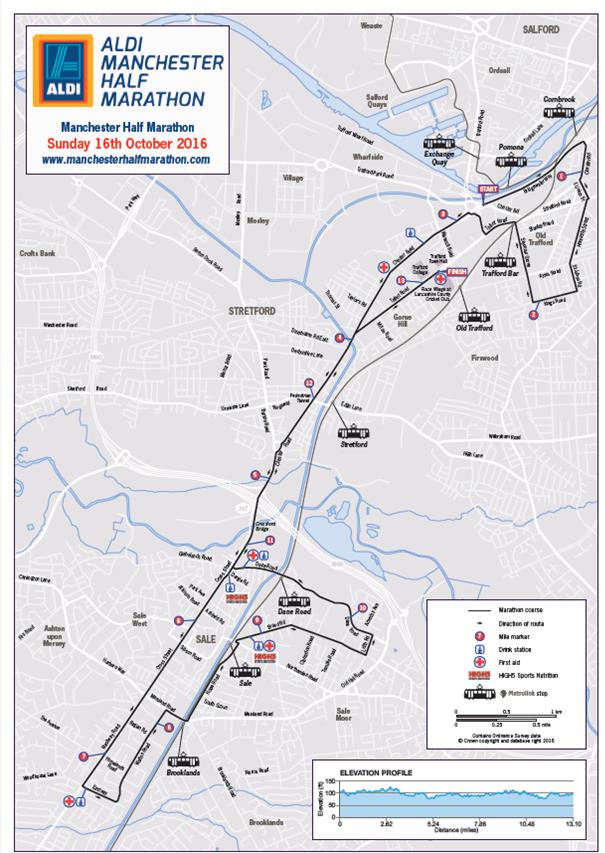 Runners were helped along the way with live music provided by The Sale Brass Band, Rock Choir and Trafford Music Jazz Collective.
Despite the day starting with rain, it soon cleared and Lucy completed it in 2:19:58 – a PB by 5 seconds and 11th V60, well done! 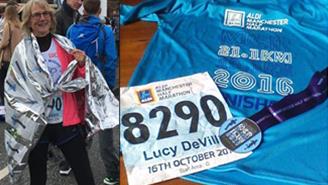