30 hardy runners took to the mainland to compete today in the Lordshill 10 mile road race. 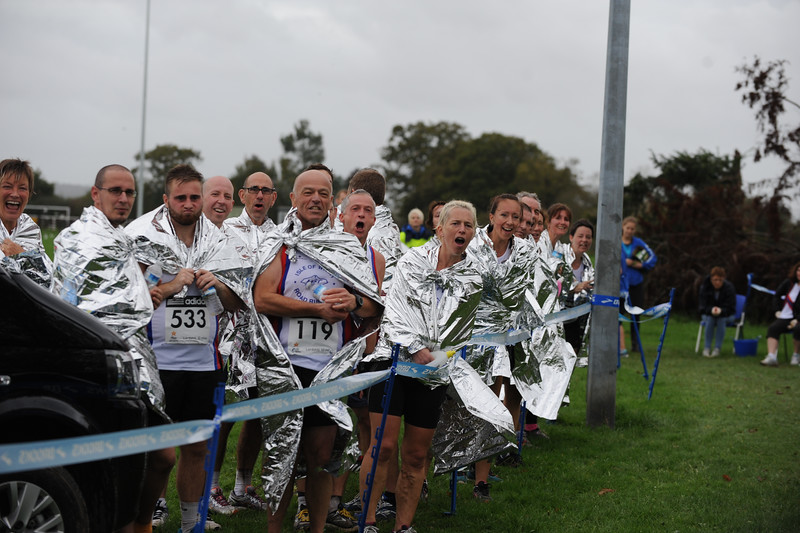 They battled wind and rain to finish – despite this a massive 11 came away with PB’s:

Well done to you all on your brilliant times and for placing so well in a field of 521 participants!

Over 40 Isle of Wight Road Runners crossed the Solent to join a crowd of 25,000 running in the worlds leading 10 mile IAAF Gold Label road race.

It was the 25th year and saw the largest number of entrants and this was a club best too.  Despite the crowds lots of club members managed PB’s and got the times they’d hoped for. Below is a list of those who stated club membership on entry:

Well done to all that ran The Great South Run, brilliant times by everyone.  Lots of great pictures on our Facebook page, below shows some of our members donning charity vests to raise money for their chosen charity’s and others in club kit representing the Road Runners.

Paul completed the Richmond Half Marathon which consisted of two laps through the famous Kew Botanical Gardens and alongside the Thames finishing in Deer Park. He ran a solo race and won this race in an outstanding time of 1:13:59. This time is inside the A Standard for consideration for next years Island Games. Congratulations Paul!

“The marathon is a charismatic event. It has everything. It has drama. It has competition. It has camaraderie. It has heroism.” Fred Lebow 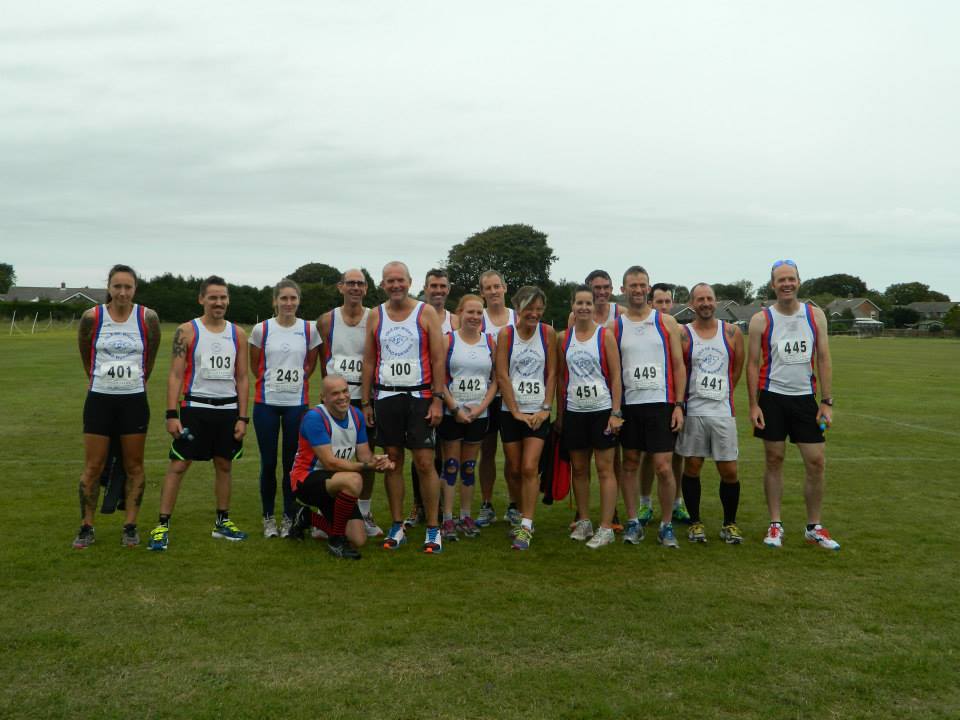 The Isle of Wight Road Runners had an outstanding club presence of 17 runners with huge support from other members by way of marshaling, water stops, cheering and photographing the occasion.

Of the IWRR’s we had Steve Hickman completing  his 100th marathon, Danny Faulkner in his club debut and Ian Russell, Tim Keyte and Tarnia Taylor completing their first Marathon.

“Our awesome marathon runners; we had 17 runners and every one of them completed the taxing course in under 4 hours 17 mins. Special mention to Pete for coming 4th overall and being the first Islander home. To Jodie for being the first Island Lady back. To Hayley for winning her age group prize. To Ian, Tarnia & Tim for completing their first marathons. For you guys who were out on the course supporting them all or manning a water station. We wiped the floor with the team awards. You are all an awesome group of people who I am so proud to be a part of. I was a total emotional wreck today. Finally, I just want to mention Steve and say no more than ‘inspirational and our friend’. Everyone deserves to sit down tonight and have a glass or 2 to celebrate the best running club in the world’s achievements.” 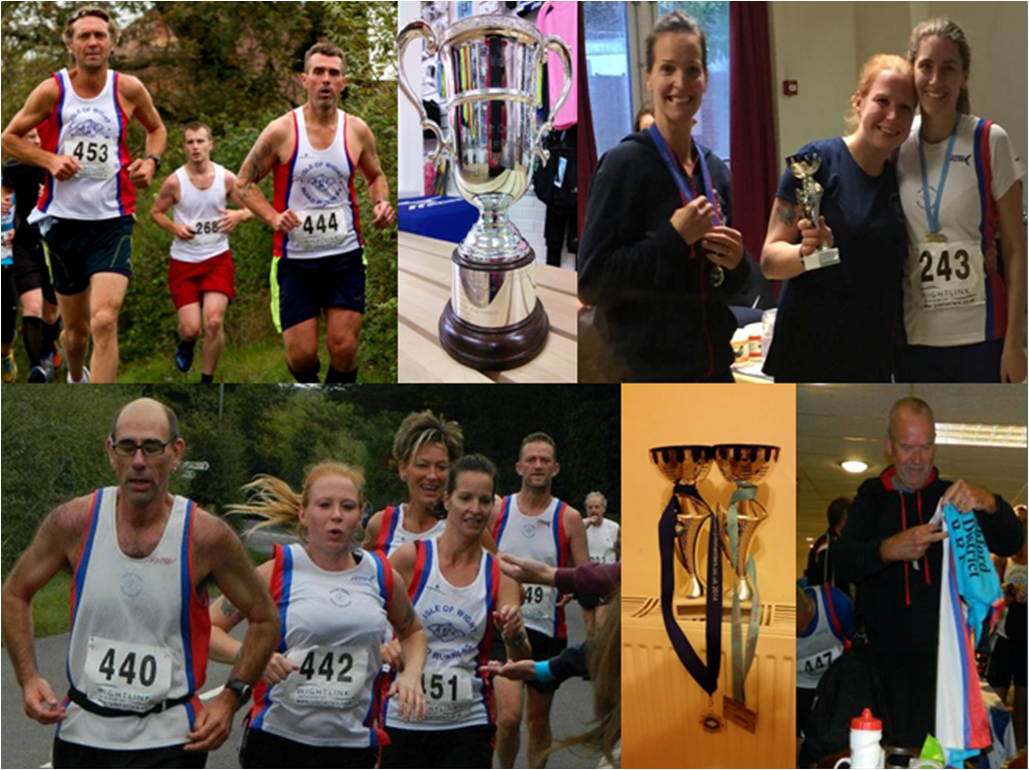 Congratulations you awesome bunch of people!

A special mention to Mens Captain Dave and Jodie; according to the Harriers website detailing your splits at mile 15 and mile 26.2 you ran a completely even race – expert pacing!! 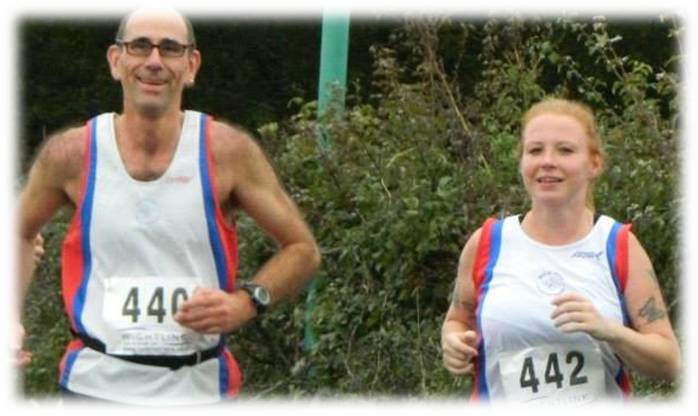 Finally the brilliant performances of Elaine and Jodie have resulted in Good for Age places at the Virgin London Marathon 2016.

The winter season has been decided upon, please find attached our schedule: Road Runners 2014-2015 Winter Series

Effective from Thursday 2nd October until Thursday 26th March, to include a fancy dress pub run, cat and mouse fun and away days. Hopefully something there for everyone.

The final race was a 5.04 miles nominated around Newport. The overall winners were guest to the club Joe Wade bringing in the men and Trish Train for the women.

For nominated times Nick Scott-Denness was closest at 3 seconds adrift, followed by Trish and then Garry.

Post run meet was held at Newport Football Club,  where we were greeted with a bar, a mountain of chips and bread-a-plenty courtesy of the club.

Points were totted up by the Womens Captain Julie Ray and Chairman Kev Winchcombe. The final results are as follows:

Which meant that Birthday boy Garry Sharp was awarded the summer series shield! 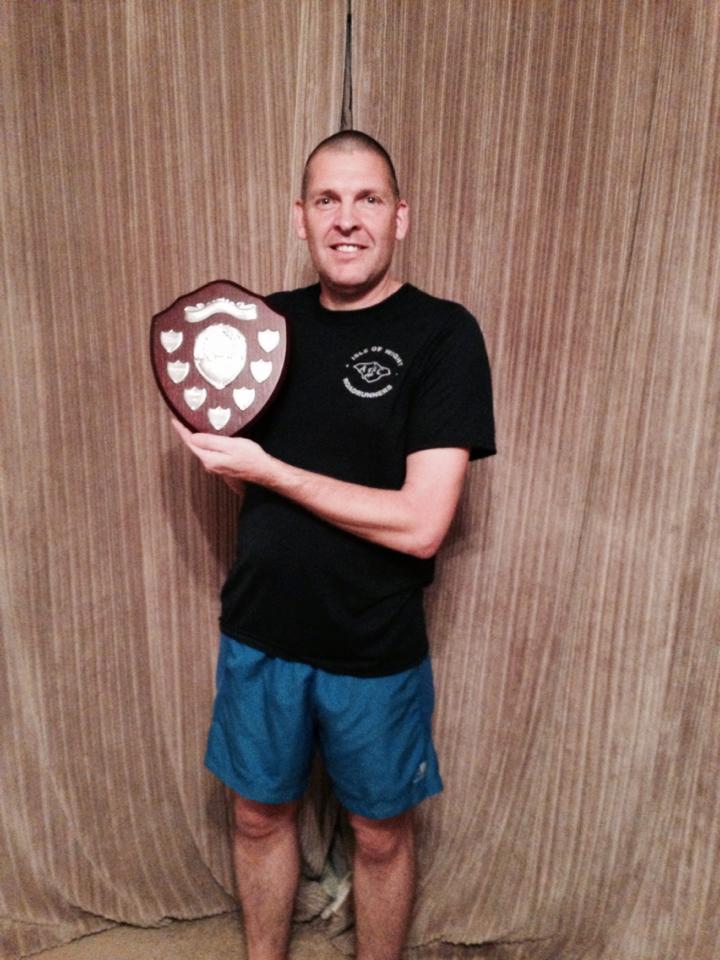 A staggering 82 members achieved points over the summer series.  31 of those scored over 100 and 9 above the 200 mark. Which is a record number for the club!

A big thank you to all that attended over the summer and a special thanks to those that helped out, back-marked and time kept to make this series a success.

Bright and sunny conditions were back drop to the Victory 5 mile HRRL race which took place from the Mounbatten Centre in Portsmouth on Sunday 14th September.

The Isle of Wight Road Runners had a team of 10 participate. 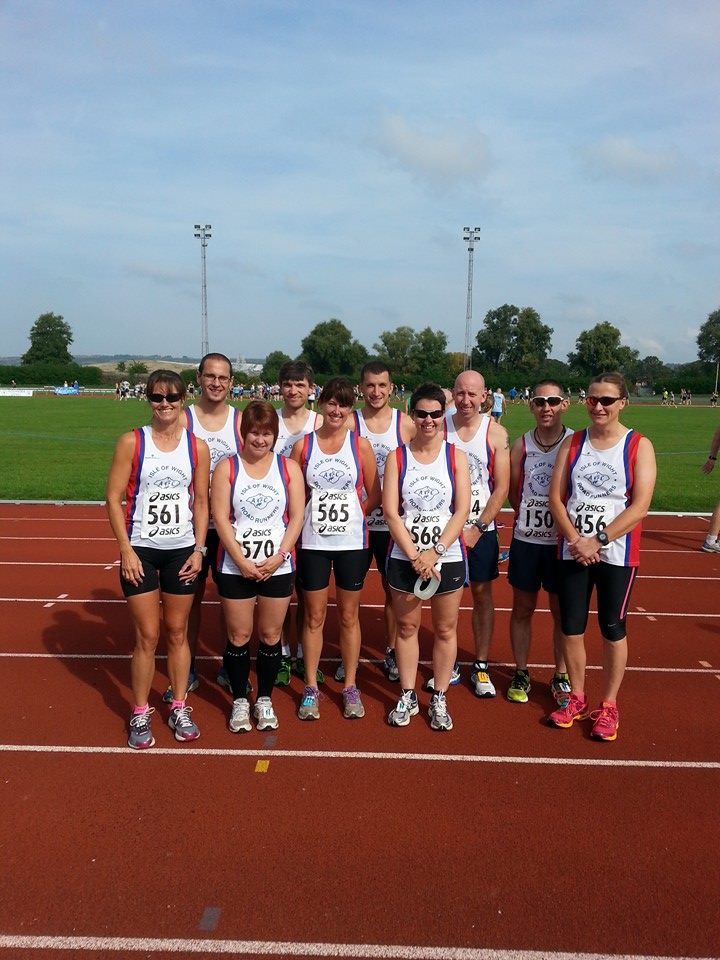 The superb results were:

Congratulations to all of those that raced and of the 10 Road Runners 8 of you took on the 5 mile race for the first time!

29 Isle of Wight Road Runners took to the hills of Ventnor to participate in the Isle of Wight Fell Running Championship Series on 13th and 14th September. 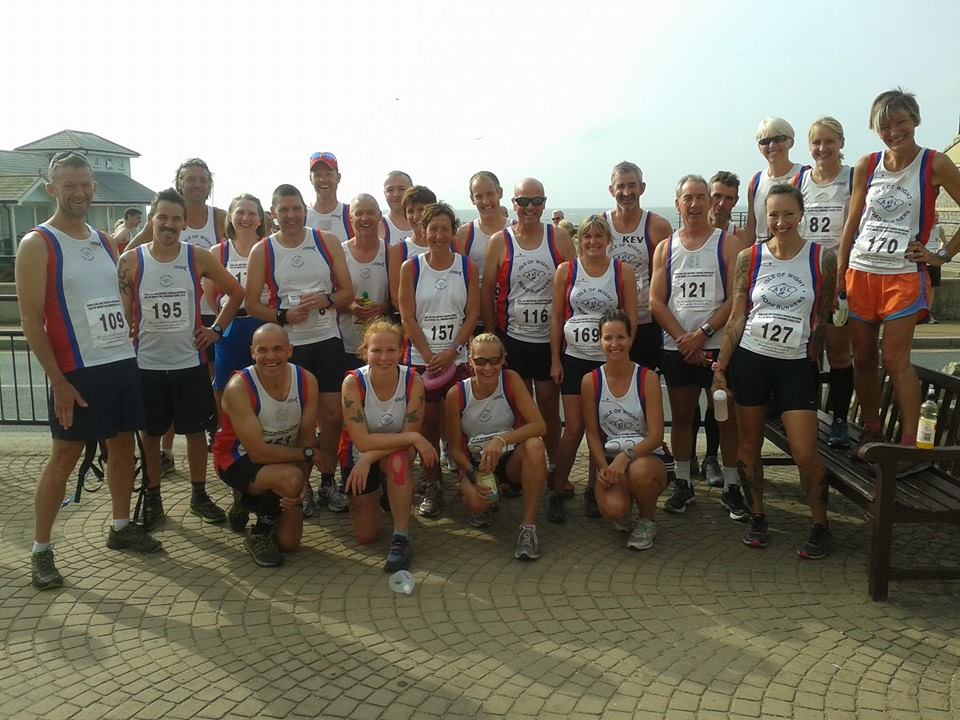 The weekend consisted of three grueling races over the two days which saw competitors run 2.7, 7.6 and finally 12 miles.

Those competing were treated to some beautiful views, huge hills and exhilarating descents.

Of the 13 ladies who competed Jodie Gifford was the first Road Runner and Islander back with a position of 16th over the three races followed by Elaine Harris (19th) and Alison Batchelor (24th)  who made up our first ladies team placing 5th,  and first islanders women team.

There were 16 RR men and over the three races Stu Backhouse finished an impressive 18th followed by Pete Wilmott (31st) and Mick Coultrup (46th). The mens team were 9th and we had a total of three mens and three ladies teams for the weekend of races – so a great turn out for the Club, well done to all who participated and also a big thank you to those who supported the club!

110 ladies & 224 men crossed the finish line of the Isle of Wight Half Marathon 2014. The club enjoyed a fantastic turnout of 31 runners, and also lots of club members offering their services to marshal and man water stations and cheer along the route. Which was very much appreciated!

Below are the official chip timings and finishing positions: 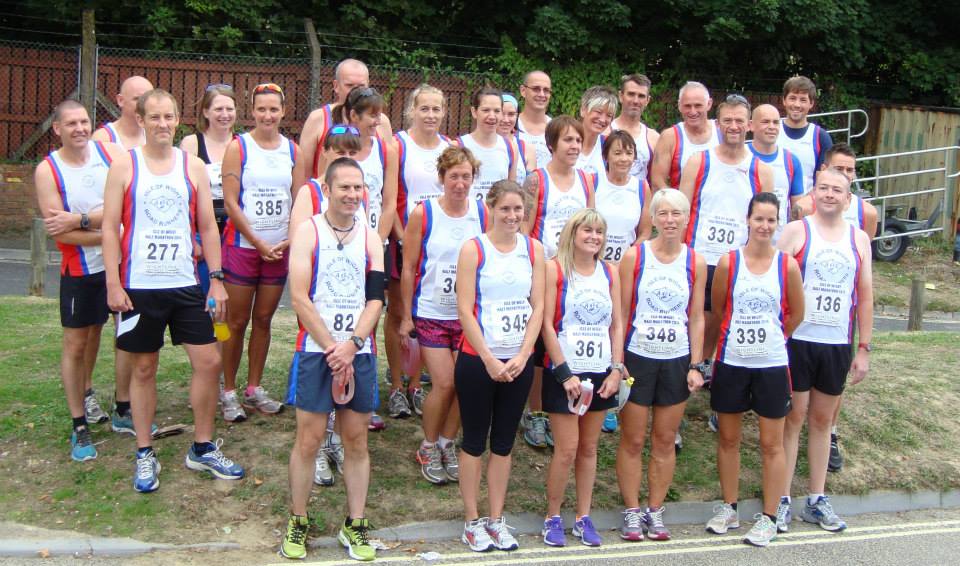 Many thanks to Ryde Harriers for another well organised event and also special thanks to all those that helped out and supported the IWRR’s. 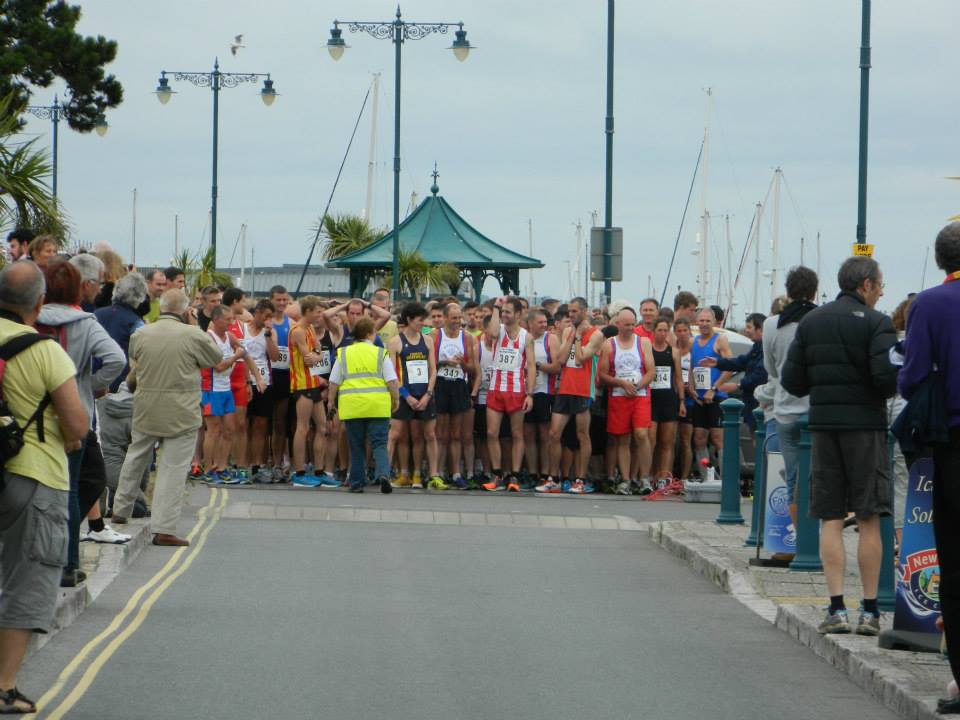 Hot humid temperatures were the backdrop for the Club 10K Championship in July 2014 with 49 club members, and lots of others in attendance kindly giving their time to marshal, time-keep and hand out much needed water!

All the runners and helpers were rewarded with bags from SkinTrade filled with some amazing goodies kindly donated by Love Running – given out with a smile by the wonderful Jo Randall.